Blackwood Blog Book Blast: Ciara Ballintyne's "In the Company of the Dead."

Here at the Blackwood Blog, we're pretty excited about this new release from Ciara Ballintyne and why wouldn't we be? An epic fantasy romance, In the Company of the Dead looks set to be a real treat for fans of the genre. If that's not all, to celebrate the release, Ciara will be awarding a $20 Amazon or B/N gift certificate to a randomly drawn winner via rafflecopter during this book blast tour. To enter, click the rafflecopter link at the end of the post!

Ellaeva’s obligations to the death goddess leave her no time to hunt down her parents’ murderer—until both duty and revenge lead her to the lonely castle where Lyram Aharris has been exiled for striking his prince. As the castle falls under siege, Ellaeva and Lyram must fight to save themselves from political machinations and clashing gods—but the greatest threat comes from an unexpected quarter.

Sounds amazing, right? If you're still not sure this is the book for you, have a read of this excellent excerpt - it's sure to whet your appetite!

His horse carried him past the girl. She was nothing but a flash of black dress and white face as he jumped. The enemy rider’s eyes opened wide an instant before Lyram caught him around the shoulders. In a tumble of legs and arms, they spilled over the horse’s rump.

Lyram crashed to the ground, knocking the breath from him and grass whipping his face. Gasping, he forced himself to his knees, then wobbled to his feet.

The woman stood observing the spectacle. Though the soldier had struck the ground mere feet from her and was already on his feet, moving towards her, her face reflected only a resigned calmness.

The man reached for her with his free hand. Time oozed with the slowness of poured honey.

“No!” Lyram choked the word into a strangled gasp, and broke into an unsteady run.

The girl brought one long-fingered white hand up in a gesture of—what? Supplication? Forestalling? Defence even.

The soldier seized her by the wrist. With her other hand, she reached out and touched the boiled leather plate over his chest.

The sword dropped from the soldier’s fingers. In one fluid motion, he crumpled at the knees and fell face-first into the knee-high grass.

Time snapped back to normal, and Lyram skidded to a stop over the motionless soldier.

The fallen man didn’t move a muscle. Dropping to one knee, Lyram reached for the man’s neck, seeking a pulse—but he stopped before touching him. The skin was blue with such intense cold that it chilled his fingers where they hovered several inches short of contact. He let his hand drop back to his side.

A shadow darkened the dim, rainy haze of the morning and he glanced up. A colourless face loomed over him, alabaster skin, midnight hair made all the darker by contrast, and eyes so black the pupils could barely be distinguished. What he’d taken for a homespun peasant dress was instead the billowing black robes of a priestess of Ahura.

What are you waiting for? Order your copy of In the Company of the Dead now! 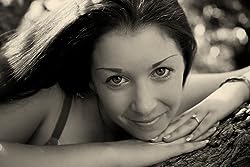 Ciara Ballintyne grew up on a steady diet of adult epic fantasy from the age of nine, leaving her with a rather confused outlook on life – she believes the good guys should always win, but knows they often don’t. She is an oxymoron; an idealistic cynic.
She began her first attempts at the craft of writing in 1992, culminating in the publication of her
debut work, Confronting the Demon, in 2013. Her first book to be published with Evolved Publishing is In the Company of the Dead.
She holds degrees in law and accounting, and is a practising financial services lawyer. In her spare time, she speculates about taking over the world – how hard can it really be? If she could be anything, she’d choose a dragon, but if she is honest she shares more in common with Dr. Gregory House of House M.D. – both the good and the bad. She is a browncoat, a saltgunner, a Whedonite, a Sherlockian, a Ringer and a Whovian… OK, most major geek fandoms. Her alignment is chaotic good. She is an INTJ.
Ciara lives in Sydney, Australia, with her husband, her two daughters, and a growing menagerie of animals that unfortunately includes no dragons.

I am very happy to know about this <a
href="https://www.essayhelperuk.co.uk">essay writing service</a>
blog, basically updating about summer is here, more inspected signs and
growth. The great picnic lunches for excitement for everyone,thanks.<br />

Wow! I am really impressed by the way you detailed out everything <a
href="https://www.assignmenthelperuk.co.uk">uk assignment writing</a>
It is really going to help me a lot. Thanks for sharing your thoughts
so clearly.<br />

This article is actually remarkable one it helps many new users that
desire to read always the best stuff. Thank you for taking the time and
sharing this information with us. <a
href="http://safetymatsuk.co.uk/">outdoor playground safety mats</a>

Very nice indeed! I think that such an approach to storytelling would be
helpful to <a
href="https://express-essays.com/articles/my-father-essay">essay the
best story my father told me</a>
!

Nice one, there&#39;s genuinely some sensible focuses on this site some
of my reader may understand this helpful. Given such a great amount of
data in it, these sorts of articles keeps the clients enthusiasm for the
site, I discovered it here, and today I am feeling happy subsequent to
discovering this valuable pos I am a freelance writer <a
href="https://www.buyessays.us">best essay writing service</a>
you can get quality writing tips from here.<br />